So, a while ago I took the Sorting-Hat-Test on Pottermore and, as it turns out, I‘m a Slytherin. What really has surprised me about this result is how utterly upset I was for days after that. I know it‘s just a silly test that can‘t be taken all that seriously, and I continuously laugh at people who cry about being sorted into Hufflepuff, but we all have a picture inside our heads of who we are and who we want to be, and heck, I‘m a nice girl. I got Rapunzel in the «Which Disney Princess Are You?» test on Buzzfeed. I‘m quirkie, I love polka dots on dresses, I adore the colour pink and my favourite piece of clothing is my Stitch onesie. I‘m just a silly little person who prefers Taylor Swift over classical music. And now J. K. Rowling just tells me I‘m a Slytherin, I‘m in the house of Voldemort, of the Malfoys, of Crabbe and Goyle, Snape is my head teacher, the bloody baron is the house ghost, and we live in a dungeon! I‘m not going to Hogwarts and I don‘t have to live ina dungeon, but this thought scared me so much! Weird, huh? 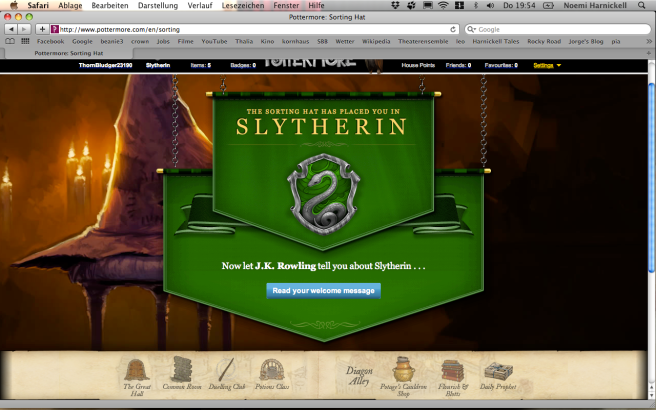 But the longer I‘ve thought about it the more Slytherin has been growing on me. What if the image I have of myself just isn‘t accurate? I would make one cool Slytherin student – I would be the first Slytherin to be invited into the Gryffindor common room, I‘d be the Slytherin who bakes cupcakes for everyone and spends all her free time in the library with Hermione Granger. Who ever said that just because according to J.K. Rowling I‘m in Slytherin I‘m evil? I‘m not mean or scary, or to quote Dan Howell: «I‘m about as violent and intimidating as a pink butterfly!»

But maybe I‘m more than I thought I was, and maybe that‘s why it‘s scary to find ourselves in a picture we never pictured ourselves in. What if I‘m more than a princess in a pretty dress? That just opens a whole new dimension for me. Like, I could wear a leather jacket and I would still be me. Or, I don‘t know, I could not help someone for once and just have a cup of tea and watch the clouds. Or, gee, I could even tell somebody no straight to their face and not feel terrible about it!

It‘s not actually necessary to take a test to challenge your own personality. It‘s just a good thing to remember that being evil doesn‘t come with a name, it comes with actions. Everything we are does. Telling me that I‘m a Slytherin never meant I should stop doing the things I love, it just tagged me as someone who is also brave and tough and sees things through. And I think that is an image I would very much like to adapt to. (Also, Draco’s kinda hot, soo… ^^)

5 thoughts on “I’m a Slytherin”