Berta Cáceres was murdered last week.
If we cared about every single person that dies and makes it into the news we would not be able to keep ourselves from devastation. But Berta Cáceres was a beautiful woman who cared quite a bit herself. About her people, about her country, about the land and the dirt and the water. She died because she wanted to live and she wanted her people to live. 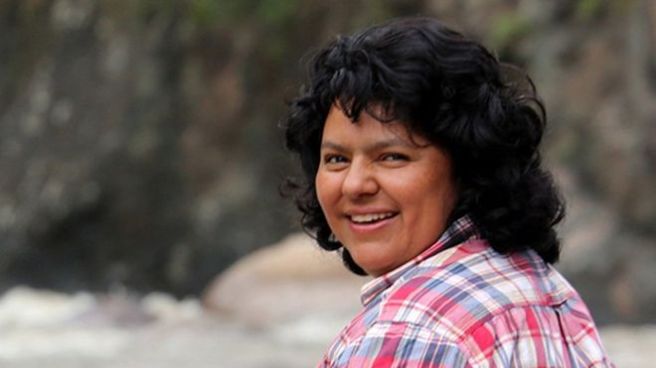 Berta Cáceres was an indigenous and environmental organizer who fought for indigenous land rights in Honduras. Land rights are a complicated thing in Honduras – essentially, what happens is this: Inigenous and Non-indigenous people have been living on those lands for centuries. They are farmers and as such their ethnic background is often of secondary importance. They never needed any titles to rightfully work the lands they were living on, they had formed communities and they had their own systems and treaties. I‘m not saying everything was always well, but all in all it worked. But Honduras is largely owned by oligarchs, meaning rich men who have the money to rightfully produce land titles that up until a few decades ago never existed. Probably the biggest jerk of them all is Miguel Facussé – he‘s rich as fuck (excuse the expression) and basically everything in Honduras belongs to him, at least in part. He and his rich friends now own lands that have been in the hands of peasants for ages, and they shoo the farmers away to build hotels or roads or oil palm plantations. This leads many families into poverty and is only one of the massive problems Honduras is facing.

Berta Cáceres founded the grassroot organisation COPINH (Civic Council of the Popular and Indigenous Organisations of Honduras); since 2012 COPINH‘s biggest fight has been against the establishment of the construction of the hydroelectric project Agua Zarca by the internationally-financed Honduran company DESA. For the Lenca (an indigenous people of Honduras) communities, the approved constructions of over 40 hydroelectric dams presents a great threat; for the Lenca people, the free-flowing Gualcarque River has a special cultural and spiritual significance. Furthermore, the implementation of dams would choke the main source of irrigation and drinking water for the community.  For lack of respect for the rights of the Lenca people, the failure to comply with Convention 169 and the negative impacts of the project on their livelihoods, Berta Cáceres organised and led a peaceful opposition to the project as the coordinator of COPINH. In consequence of their actions, Berta Cáceres and other Lenca leaders have been the target of threats and intimidation.

What‘s sad about Berta Cáceres‘ death is that it doesn‘t even come as a surprise. She was fighting for her people‘s rights, of course somebody murdered her! Because the rights she was fighting for aren‘t a given. Because rich jerks rule the country and they don‘t care about peasants or tradition or the ground they are standing on. All they care about is their little kingdom that will not fall, even if the world around them does. What‘s also sad is that the murderer is most probably still walking free. It‘s not unlikely that some rich person from DESA or the government or a sympathiser paid someone off to get the job done. Investigations? Better forget about that.

But here‘s what leaves me hopeful; the rich jerks, DESA, politicians, they try and denunciate Berta Cáceres as a drama-queen, a liar whose opinion doesn‘t matter. Except that it did. Berta Cáceres did not have to lie to scratch the petty facade behind which all those denunciators are hiding. She merely told the truth, she pointed out the injustice and she had the courage to act and to speak. And it hurt them. It hurt them so much they had to kill her. And maybe, if we ask ourselves why things like this still happen in our 21st century world, the answer is because there are not enough people like Berta Cáceres.

We must not be defeated by her death; we do not live in a just world and if all we can do is stand up to a bully at school, then that makes the world an infinitely brighter place.

Be bold, and be courageous, and remember:

I feel like I should mention that not every rich person in Honduras is a jerk. I know many wealthy Hondurans who are lovely, caring people and who are deeply shaken by Berta Cáceres’ death. Also, the conflicts in Honduras are not as straight forward as I put them. There’s a whole lot of aspects to be considered, which I simply ignored in order to make this blog post more readable!