Hello lovely folks! After having read the amazing novelisation of Star Wars: The Empire Strikes Back I could not resist and bought the sequel, The Return of the Jedi. I‘m so sure you know the plot already but there are people, such as my mum, who only know that it‘s about hot guys fighting each other in outer space. So here comes the blurb:

«Han Solo, frozen in carbonite, has been delivered into the hands of the vile gangster Jabba the Hutt. Determined to rescue him, Luke Skywalker, Princess Leia, and Lando Calrissian launch a hazardous mission against Jabba‘s Tattooine stronghold.
At the same time, Darth Vader and the Emperor have ordered – and begun – construction on a new and even more powerful Death Star. Their goal: to crush the Rebel Alliance once and for all. The only hope for the Rebellion is to gather all the warships of the Rebel fleet into a single giant armada… and launch a heroic, last-ditch assault on the most deadly battle station in the galaxy.» 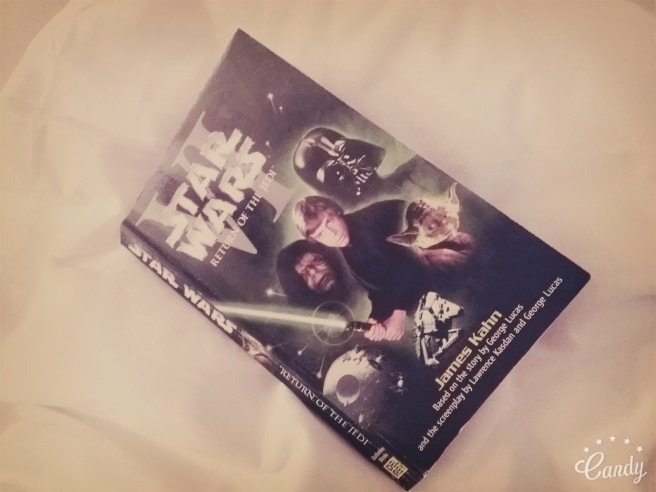 I must say that it was a bit of a disappointment this time; I still had fun reading it, but there were a few very typical novelisation errors in it that made me downgrade it. For example, the author has this annoying habit of constantly spelling out what R2-D2 and Chewbacca are saying, and not to be disrespectful towards their languages or anything, but who understands that?!

Well, at least he tried! Another bummer is how whiny Leia appears. She cries all the time, especially when Han Solo says something nice. She acts like the utter overly-attached girlfriend, unwilling to let him out of her sight at all. Get a grip, girl! She has also stopped calling him «Hot Shot» – why?! That was such a great nickname for him! And Han Solo, he is acting like a dominant, abusing asshole! (maybe that‘s why?) After Luke reveals to Leia that she‘s his twin sister Han storms after her and starts shaking her while she‘s already sobbing for, like, minutes on end! And in the end when he finally learns the truth he doesn‘t just kiss her like he did in the movie, oh no! – He pushes her into the bushes in spite of her being injured – I realise he‘s trying to express his love, but that just seems a little aggressive! On the other hand, book Han and Leia are pretty much bound to create an angsty brat like Kylo Ren.

What I loved was how Darth Vader refers to Luke as «his boy». I mean – aaw! That is a whole new universe of cuteness!

And I must actually say that book Luke is a lot more badass than movie Luke. He doesn‘t do anything more, but following his trail of thought you can actually decipher all the conflict that must be going on inside of him. In the movie he appears to never even consider going over to the dark side, whereas in the book he falters more than once. And after all the terrible things Darth Vader has done to him and his friends, Luke only suggests that this is the darkness driving him and not actually Anakin Skywalker himself (who he considers to still be good). Could we say the same thing about terrorists and dictators? Being able to forgive him like that, that demands a lot of heart and courage. And that makes Luke some seriously cool person!

Lastly, the author did a great job in actually somewhat valuing Leia‘s past. Her entire planet has been blown up, that‘s all of her family dead, all of her friends, everything she loved is just gone – yet, somehow Luke manages to get more sympathy for his dead mentor throughout the entire saga. Leia‘s grief is mentioned in several parts in the book, though, and we even learn a little bit about her early childhood (like the fact that she used to have a wookiee doll – aaaw!).

2 thoughts on “Sexy Books: Return of the Jedi by James Kahn”