Just read: After You by Jojo Moyes

Hasn’t she crushed everybody’s heart by creating Will Traynor! Seriously, have you ever fancied an arrogant quadriplegic so much? 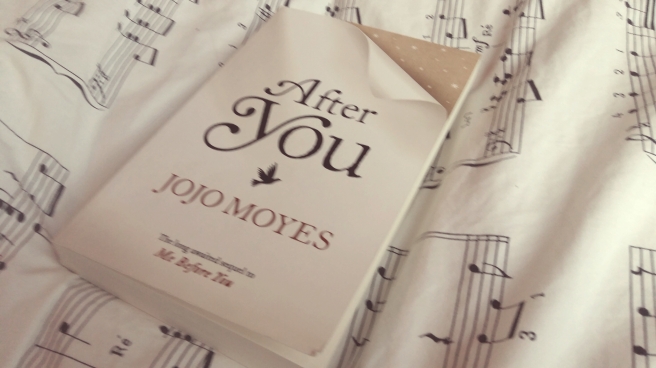 It took me a while but I finally got around to reading the sequel to Me Before You – AFTER YOU. I sort of had mixed feelings about that book before I started reading it, mainly because Me Before You has a really beautiful ending; it crushed my heart into tiny little pieces, but it ended very smoothly. And I worried that a sequel might just over do it. But then the last week of university happened and I failed miserably in an exam, so Corinne took me book shopping during our lunch break (you haven’t met Corinne – she loves books. And I’m pretty sure she won at the exam. She’s very smart. Anyway.) and I ended up with that book in my hand, and the blurb just had me:

Lou Clark has a lot of questions.

Like how it is she’s ended up working in an airport bar, spending every shift watching other people jet off to new places.

Or why the flat she’s owned for a year still doesn’t feel like home.

Whether her close-knit family can forgive her for what she did eighteen months ago.

And will she ever get over the love of her life.

What Lou does know for certain is that something hast o change.

Then, one night, it does.

But does the stranger on her doorsteps hold the answers Lou is searching for – or just more questions?

Open it and she risks everything.

But Lou once made a promise to live. And if she’s going to keep it, she hast o invite them in.

I spent two days in bed just swallowing this book up. I only cried once – from page 3 to 407! And I don’t mean I occasionally had to wipe away a tear or two, no – I was sobbing! Proper wailing! For hours!

From what I’ve gathered by the comments on Goodreads, quite a few people are disappointed by After You because they feel it doesn’t do the prequel justice. The main problem, I think, is that the book doesn’t have a strong story line. There is not that much of an action filled plot, it’s the much more subtle story of how somebody might overcome grief. Grief is on every page, and it is reflected in so many different ways; and possibly if, like me, you’ve never experienced any grieving loss, it can get a little bit repetitive. But that didn’t make the story any less of a worthy sequel to me. I imagine grief would be quite repititive, too, so it felt like a very well developed scenario. The characters were all very 3-dimensional, they felt incredibly alive and real, and I fell in love with all of them.

And the beautiful thing is that, although the story is about loss and grief, it also has a very hopeful connotation. I mostly cried because there is so much love on these pages, so many reasons for the characters to want to stay alive. The Traynors, rich and cold and arrogant, loved their Will so much that they invite Lily, a wild, rude, chain-smoking sixteen-year old, into their lives with open arms and open hearts. Lily is such a key character. She basically takes the role Louisa had in Me Before You, whereas Lou is sort of stuck, just like Will used to be – except that she really has a choice of how to live her life. It’s the story of how Lou finds her real potential («Don’t say potential!») and starts living the life Will wanted her to live.

I believe that this book is important also in the aspect of the topic it discusses. Assisted suicide is extremely controversial in almost every country, and it is one thing to talk about what makes a person opt for it and how they see it through, but it is equally important to talk about what happens next. What happens to the friends and familiy who were there, the ones that allowed it to happen? Do they feel like murderers? Are they treated as such?

In Switzerland, where I live, this really isn’t much of an issue. People decide to die with Dignitas or Exit all the time, and I’ve never heard anyone call their families murderers for being with them when they died. But it’s so important to note that in many places these are people’s sentiments exactly. And it’s so important to realise that Lou or the Traynors really had no say in this. What they are left with is intense grief and a sense of failure. Much like everyone else.

Get the tissues out, guys! You’re in for a snotty ride!