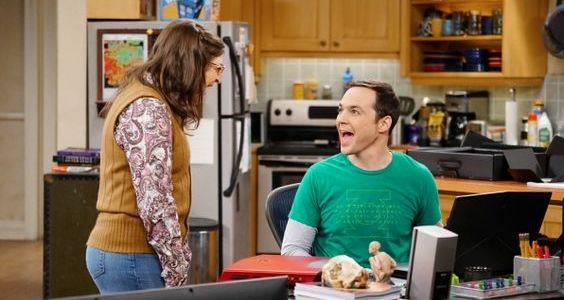 I am very sure I’m speaking for almost everybody when I say that I was pretty devastated about the final episode of How I Met Your Mother. I hated it so much I stopped watching TV shows altogether for a while (until Inga convinced me to watch Gilmore Girls, that is). It was only recently that I decided to give in and watch the rest of The Big Bang Theory – which I was certain was going to be a) boring, b) distasteful, and c) make me not want to be in a couple for the rest of my life.

But series 9 has proven to  be very much the opposite!

The main reason I started watching the show again was because I grew tired of the endless amount of spoilers over on Tumblr. I knew Leonard and Penny were going to get married, and Sheldon and Amy would have coitus, and it just sounded so cringeworthy. Instead, I may have developed a crush on Sheldon Cooper. He has evolved so much since the first series and has actually become likeable since he’s started to admit his feelings. While all the other characters have remained the way they were first introduced (geeky, awkward, self-conscious and a little sexist), Sheldon and Amy are really finding themselves. Amy does not change a thing in her appearance, she doesn’t buy short dresses or high heels, but she realises her own worth and finds that being confident makes her very attractive. And Sheldon, though still geeky and odd, recognises Amy as worth fighting for. More than that, they bring such an important element to the show that was not there before: trust.

While Leonard and Penny constantly go behind each others’ backs and Bernadette controls Howard’s every move, Sheldon and Amy are very straight forward and honest. In the scene where they actually, finally, have sex, Amy tells Sheldon that she’s nervous and doesn’t know what to expect, to which he replies, «Neither do I. But we can find out together.» The entire scene is so innocent and such a stark contrast to what we usually see with Penny and Leonard (which is known to be fast and, on a large scale, disappointing).

I have loved The Big Bang Theory for years, and I find it very hard to not like any of the characters, however annoying they might be. But rewatching some of the older episodes, I’ve only now realised how much my way of thinking has been influenced by characters like Penny or Bernadette who make it look okay to dress like a slut in order to get free drinks. I love that Amy now finally gets to show how sexy cardigans really are! So if you’re looking for something uplifting – series 9 is excelling on every level!

I am currently going through a rebound phase that involves rewatching old episodes from How I met your Mother (as well as drooling over ancient pictures of Orlando Bloom and rediscovering my love for polka dots!). And I know this is petty and I know it has been a while since they aired it, but the HIMYM finale still upsets me!

First of all, the series is 9 seasons long and it is called How I met your MOTHER – I was really excited about Ted finally meeting her, and then she dies?! I know this is how life can work, you wait your entire life for someone and then they are given very little time… but then why make a sitcom out of it? It‘s depressing!
And yes, Ted has been in love with Robin forever, but I thought the moral there was that even though you think you can‘t stop being in love with a certain person, you may suddenly meet someone who will make you so much happier than the other ever could. The moral shouldn‘t be, have kids with someone who can, then hope she dies so you can get back together with your ex.

Which brings me to my second point, namely Robin and Barney. Half the series revolves around these two and their on-off relationship, and throughout most episodes I cared less about Ted finding true love than Barney and Robin dating. It was so beautiful to watch Barney go from a disgusting womanizer to a caring boyfriend who is willing to commit. None of the other characters evolved as much during the show, and I this may well be the reason we love him so much. He shows us that everybody can change if they set their mind to it.

An entire season is dedicated to their wedding, and don‘t even get me started on the emotional effort I had to go through! I can‘t handle romance, I always cry, and please, Ted proposes to Tracy on a lighthouse, Barney organises an ice skating rehearsal dinner, and BLAH! I was a wreck! So WHY do they get a divorce?! Is it just to show us that life is not pretty and romantic at all? The one thing that made us believe in true love, more than watching Lily and Marshall, and to hell with Ted and Robin, the one thing that proved that true love is real were Barney and Robin. They are such messed up people, so complicated on the inside and outside, and somehow they find to each other and they find themselves within each other – and they get a divorce fifteen minutes after we‘ve just seen them exchange wedding vows?!
It‘s not even that they get a divorce that‘s so bad – it‘s life, people split up. But there is this huge change going on in Barney over the seasons, and we start to really like him as the show goes on. But then he just goes back to his old patterns, being the jerk he was in the first ever episode.

It‘s as if the makers of the show really didn‘t want their viewers to have any illusions about life. True love doesn‘t exist, people don‘t change, people die. But it‘s a TV show, I‘m watching this because I‘m desperate for the illusion!

Now if you‘ll excuse me, I‘m going to need some Taylor Swift to get over my emotional damage caused by fictional characters! (Aside from that I‘m grand, though! 😉 )